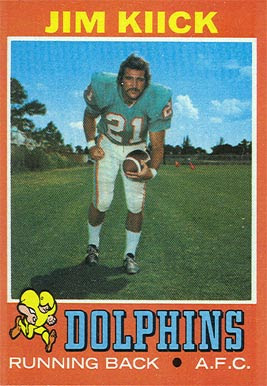 Kiick was drafted by the Dolphins in 1968, and was their starting halfback for the next 4 seasons, teaming up with fullback Larry Csonka in their "Butch Cassidy and the Sundance Kid" backfield. Kiick made the Pro Bowl in his first 2 seasons, and led the AFL with 9 rushing touchdowns in 1969.

In 1972 and 1973 he only started a handful of games, as Mercury Morris became the featured halfback. Kiick was used primarily on passing downs and short-yardage situations.

In 1974 he started half the games, but that was his final season with Miami.

He joined Dolphins' teammates Csonka and Paul Warfield on the WFL's Memphis team for the 1975 season. The league folded before the end of the season, so he was back in the NFL in 1976.

Although wanting to join Csonka with the 1976 Giants, he ended up with the Denver Broncos. He was released late in the 1977 season, but caught on with the Redskins for 1 game, then retired after the season.

Posted by Jim from Downingtown at 11:22 PM

Was saddened by this and this coming from a lifelong Redskins fan. Saw his name on the in memoriam section on TCDB this morning. 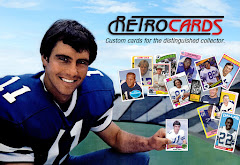